GET OUR NEWSLETTER
Top Posts

Can Chocolate Labs Have A White Chest?

Our writers & fact checkers independently research, test, analyze, and recommend the best motorcycle products. We may receive commissions from purchases made via our links.

‍Chocolate color Labradors are known for their striking coat, which is usually a deep rich brown. But some of these Labs have white chests or other markings.

Purebred chocolate Labs can have white patches in their coats, including a white chest, tail, or paws. This inherited genetic variation does not mean the dog is a mixed breed. These spots can fade as the Labrador ages; however, there are instances where they are there for life.

Understanding the nuances of Labrador genetics can be daunting, but with our extensive knowledge and experience in this area, we'll guide owners through potential causes and considerations.

Yes. White markings on a chocolate Lab (or any other color) can appear due to genetic factors while keeping the dog 100% Labrador.

This does not mean that the Lab is a mixed breed; it just means that this particular animal inherited two copies of the same recessive gene variant, leading to white hair in their coat.

White marks are more common in Labs than in many other pure breeds, so it's important to be aware of this potential trait if you're looking for a cocoa-colored Lab puppy.

The most common cause of white marks on a brown Lab is simply heredity – the Lab has inherited two copies of the same gene from its parents, resulting in white patches.

There are several factors that could lead to white marks on a  Labrador puppy.

• An injury or illness which has caused fur loss in certain areas.

Simple, harmless genetic variation is the cause in the vast majority of cases.

Are There Any Health Concerns for a Chocolate Lab With White Markings?

No. The white hair on a chocolate Labrador are caused by genetics and not any health issue.

As long as the animal is free of any genetic problems from its parents aside from the white marks, they should enjoy a healthy life with no additional concerns due to its coloration.

If white fur, or even fur loss, occurs suddenly in an adult Labrador, it is possible that this indicates a health issue and should be investigated with your veterinarian.

Can Other Labrador Retriever Coat Colors Have White Markings?

Absolutely, yes. They're just a lot harder to see than a black lab with white fur.

Yellow Labs have much lighter coats, sometimes light cream-coloreed, so the white and tan markings don't stand out as much; they're practically invisible on a yellow Lab.

If you look closely at a Yellow Lab's coat, chances are you'll find some small patches of white in their fur.

Is It Possible to Hide White Markings on Chocolate Labrador Retrievers?

No. There is no way to hide or camouflage the white chest markings on a Labrador, as they are an inherited trait that cannot be altered.

There aren't any oral supplements, medications, shampoos, or lotions that will turn your Lab's white chest markings a darker color without artificial fur dyes.

Dye for a dog's fur is not recommended by any reputable veterinarians or professional grooming standards.

The best thing owners can do for their Labrador is accept their coat however it comes and provide them with proper care and love.

What Does the AKC Say About White Spots on Labradors?

The Labrador breed standard specifically calls out the presence of any white patches on the dog’s coat.

It is generally accepted that when Chocolate Labradors do feature a white mark, they may include a solid patch on the chest, feet, or tip of the tail.

Despite commonly accepted beliefs, the American Kennel Club does not disqualify Black Labs with small white marks on their chest for competition.

These dogs are just as healthy and capable of performing any tasks that would be expected from a pure dark brown Lab!

What is a Mismarked Labrador?

The term “mismarked” describes purebred Labs that has more than the allowable amount of coat color variation.

A mismarked dark Chocolate Lab puppy can make great companions and working dogs, despite having a coat that is not considered breed standard.

Can I Show My Mismarked Labrador?

No, not if the white markings are excessive by American Kennel Club standards. Only a small white spot counts as a show-worth example of the pure breed.

Although excessive white markings may disqualify your Labrador from being an AKC breed show dog for being mismarked, this does not detract from the fact that they remain a splendid example of a purebred Lab.

Where Does Mismarking Show Up on Labrador Retrievers?

Mismarked Labs may exhibit white patches anywhere on the body, but they are most commonly seen on the chest and feet. The size and distribution of these spots can vary considerably.

On some dark brown Labradors, the white markings will be solid and come in all shapes and sizes. Other times, it may just be a few scattered hairs or even an entire white paw.

Regardless of the presentation, these mismarks do not impact the health or temperament of your Labrador Retriever.

Why is My Chocolate Lab Getting White Hairs?

Labradors may start to get grey or a few white hairs in their coat as they age. This is normal and nothing to worry about – it just means they’re getting older!

These grey hairs or white hairs can make them look a bit like they have markings, but this is not the same as inherited white patches in the coat.

Age markings are less noticeable on a dog with a yellow coat or lighter brown fur and way more noticeable against black fur.

Can I Get a Chocolate Lab with a White Chest From a Breeder?

Yes, but it depends on the breeder. The AKC actively discourages the intentional breeding of mismarked Labradors, but there are breeders out there who do it.

Any breeders specializing in purebred Labradors may have puppies with white chests or other white markings, but it's important to ask when selecting your puppy.

Two solid dark brown Labradors can produce a whole litter of puppies with white markings, so it is always best to ask the breeder about any potential mismarked puppies before purchasing one.

Getting in touch with a breeder early, before a littler is born, can help you call dibs on any mismarked Labs that may show up.

How Can You Tell Purebred Labs?

Purebred Labradors are beloved for their intelligence, adaptability, and friendly personalities; however, identifying one can be difficult if you're not working with a top-tier Lab breeder.

Visual confirmation and official lineage certifications may indicate your Lab's genetic ancestry, but only a laboratory DNA test will give you an answer with 100% confidence.

Mark is the founder of Everything Labradors and a husband and father of 3. He enjoys spending time with his family, including his dog Molly, a Labrador/Golden Retriever mix. He’s a big fan of the outdoors and loves to travel to new places.

Can You Shave A Black Lab's Hair? 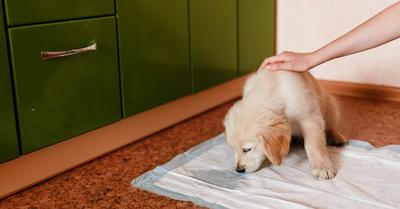 How To Potty Train a Puppy

The Ultimate Guide on Removing Your Dog’s Elbow Calluses

How Do I Know If Your Lab Has Dwarfism

What To Do If Dog's Nail Is Split Down Vertically

Everything Labradors is a personal blog about Labradors, Labradoodles, and other Lab mixes. We cover general info, tips, and product reviews.

Reach out to us via contact@everythinglabradors.com

EverythingLabradors.com is a participant in the Amazon Services LLC Associates Program, an affiliate advertising program designed to provide a means for sites to earn advertising fees by advertising and linking to Amazon. This site also participates in other affiliate programs including but not limited to ShareASale, CJ, and ClickBank, and is compensated for referring traffic and business to these companies.