GET OUR NEWSLETTER
Top Posts

Why Do Labradors Eat Poop?

Our writers & fact checkers independently research, test, analyze, and recommend the best motorcycle products. We may receive commissions from purchases made via our links.

‍It might seem uncommon to watch a Labrador eat poop, but don’t worry. This is a pesky behavior by many dog breeds, and we’ll explain why it happens.

Labradors are like any other dog, and they like to eat poop. Generally, this is harmless, and they do it because of an increased appetite, an instinctual or evolutionary urge, sudden or increased boredom, or nutrient deficiencies. But there is a chance it can be dangerous and unhealthy too.

Coprophagia is a natural behavior that is found in many other animals, including Labradors. Luckily, there has been tons of research on dog behavior to analyze why this happens. We have compiled this research and provided the most in-depth guide below to explain it.

While other animals may eat their own poop for nutrients, this is not the case for dogs or Labradors. Instead, it’s simply a bad habit they have based on breed instincts, curiosity, and their hunting nature.

Excessive eating of feces can cause health problems too. It’s not recommended to allow a dog to eat their own poop daily as it can cause them to vomit.

We have found the most common reasons why Labradors eat poop include an increased appetite, an instinctual or evolutionary urge, sudden or increased boredom, or nutrient deficiencies.

Labradors are known for their intelligence and eagerness to please their owners. They also have a reputation for being clean, which is why they are often used as service dogs.

However, it's common to see Labradors eat poop because of an increased appetite. A hungrier dog is more likely to engage in this behavior.

Consider how often the dog eats if they start to eat poop more. It might be time to revisit their eating schedule by allowing for more frequent meals or increased calories.

Labradors have a strong instinct to eat poop because of their evolutionary trait and natural instincts. They want to keep their surroundings clean, and eating poop is one way to do it.

Younger labs have a tendency not to recognize their mother's smell, so they will eat their poop, thinking it is their mother.

They also do this because they believe the feces will give them the nutrients they need to survive. These reasons are Labrador instincts that require teaching and training to evolve from.

Labradors can sometimes be a handful, but they are also very playful. They love to play with their owners and other animals in the house.

However, when bored or stressed out, they may start eating poop because it is something new to them or something that will get them attention from their owners.

It’s also a sign they are stressed and dealing with anxiety. This can happen for many reasons, including health, environmental changes, routine changes, or a lack of attention.

Another theory for why a Labrador eats poop is a poor diet. This includes a nutrient deficiency, causing them to eat poop in hopes of fixing this deficiency.

We recommend checking the dog's current diet to see if this could be possible. Discussing it with a vet could also be beneficial in identifying anything lacking.

This highlights a vitamin-B deficiency, and visiting the vet could result in tests to make the final determination.

How Can I Get My Labrador To Stop Eating Poop?

Labradors are curious, playful, and intelligent animals. They like to explore their surroundings and the world around them.

Sometimes, this curiosity can lead to some unwanted behaviors, such as eating poop. And it should be addressed because this can make a dog get sick, and it’s not the healthiest habit for them to do regularly.

While it is hard to teach a dog not to eat poop, there are some things you can do to make sure this doesn't happen.

Put The Labrador On A Leash

Labradors have a unique way of marking their territory, which includes eating their poop. One way to combat this issue is by putting the dog on a leash for their trips outside.

This allows the owner to stay close, and the dog is less inclined to try this behavior on a leash. Doing this can help them drop the habit and after a week or two, try letting them go without the leash to see what happens.

Pick Up The Poop Afterwards

Another way to prevent a Labrador from eating poop is by picking it up immediately. This eliminates the opportunity for the dog to consider it because the temptation is gone.

This is likely a less effective method, and we prefer training techniques first for a permanent solution.

We prefer this method because it provides a permanent solution to the problem.

Use Meat Tenderizer In Their Food

Adding meat tenderizer to a dog’s food causes the smell of their poop to change. This makes it less inviting for the Labrador and reduces the likelihood they will eat it.

Meat tenderizer is cheap and can be found in most cabinets at home. It also has no impact on the dog’s diet and only changes the smell and flavor of its feces.

As we have mentioned, a deficiency of any kind could result in poop eating. Changing the dog food they eat regularly to repair these deficiencies is an obvious way to address the issue.

Something like Purina One will help improve overall health while increasing essential vitamins and enzyme consumption.

Is It Bad For A Labrador To Eat Poop?

No, it's not bad for a Labrador to eat their poop, other than temporarily feeling sick from it. However, eating another animal's poop is a much bigger risk, which can be bad for any dog.

When a lab eats other animals' poop, it's bad because this is an entirely unknown animal, and there could be germs, diseases, and other problems to worry about.

In most cases, a Labrador that eats its own poop is typical. It may make them vomit at first, but that’s it. Don’t get concerned immediately unless there are any noticeable health issues from the behavior.

Will My Labrador Get Sick From Eating Poop?

Some dogs may be prone to eating poop due to their natural instinct. While the occurrence of this is common, it often doesn’t lead to any serious health issues.

However, when Labradors eat poop, they tend to vomit more often than not. But always stop a dog from eating the poop of another animal because this can be much more dangerous and harmful to their health.

Some dogs will eat their own poop or other dogs' poop without knowing that it might cause them to get sick. This is because dogs are naturally attracted to scents and tastes that are similar to what they would find in feces and urine.

Labradors eating poop also include other risks like parasites, viruses, or contamination of toxins. This is more likely when a lab eats another animal's poop rather than its own.

Mark is the founder of Everything Labradors and a husband and father of 3. He enjoys spending time with his family, including his dog Molly, a Labrador/Golden Retriever mix. He’s a big fan of the outdoors and loves to travel to new places.

Dog Ate Chicken Bones & Has Diarrhea (What To Do) 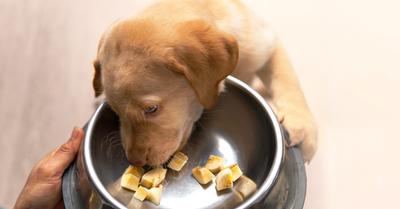 What To Feed a Labrador Puppy (Best Options)

Labrador Anxiety: How To Deal With Separation

How Long Do Labs Live With Arthritis?

Everything Labradors is a personal blog about Labradors, Labradoodles, and other Lab mixes. We cover general info, tips, and product reviews.

Reach out to us via contact@everythinglabradors.com

EverythingLabradors.com is a participant in the Amazon Services LLC Associates Program, an affiliate advertising program designed to provide a means for sites to earn advertising fees by advertising and linking to Amazon. This site also participates in other affiliate programs including but not limited to ShareASale, CJ, and ClickBank, and is compensated for referring traffic and business to these companies.